In linux there are three permissions for any file or directories:

These file permissions are further divied into three categories of permissions:

To understand file and permissions better we would have to visualize how users and groups will work with our linux system.

Let say that you are a small IT company where you have team of developers and devops. Assume following people fall in above two groups. 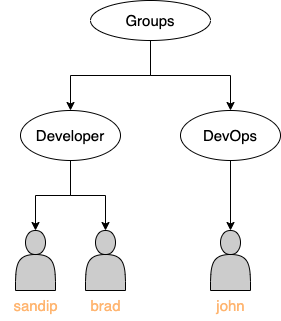 Now, you have a web application running on linux server and you wanted to give access to these people. You also want to control your groups so that they can perform specific tasks on your server.

How to create a group in linux?

To create a new group in linux use groupadd command. In our case we will create two groups called developers and devops using this command as shown below:

You can also create group using specific group ids in this case instead of running above commands you will run following commands:

Now, that we have created groups for our organization we would want to create different users for our webserver and assign these user to appropriate groups.

How to create a user and assign a group to user in linux?

Above are different methods of creating users in linux in our case we want to create users and then add them to specific groups we already created for them.

To do this we need to run following commands instead of running above commands:

How does file permission works with user in linux?

Now, that we have created users in different groups we can do two things here:

Let say that user sandip is logged in to webserver and he creates a new directory:

In this tutorial we are only focusing on permissions let use look at how permissions are assigned to created folder using below diagram: 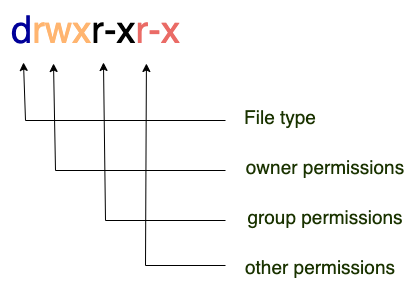 Looking at permissions above you can say that owner in this case user sandip has rwx permissions i.e. owner permissions.

If user brad logs in to ther webserver and then he goes to test/ directory created by sandip user. Now, he can do following things in this specific directory:

To fix permission issue for brad user you can add write permission for developers group for this directory.

What is chmod command in linux?

Next thing we need to understand following abbreviations:

Next, we need to understand following basic permission realted abbreviations:

Following table can be used for numeric permissions:

Some of the examples of chmod command

Checkout following commands that can help you understand chmod command in detail:

To learn more about chmod command use following link to this command manual page:

What is chown command in linux?

If you want to change the ownership of the file or directory you can use chown command. For example: let say that user sandip who is from developers group created a file called test.txt.

If you check the file permission once you created this file you will see following:

You can see that this file has owner=sandip and group=developers. Now, let say that you want to change ownership of this file.

You can login as root user or use sudo user to change the ownership of the file using following command:

I hope you enjoyed this tutorial if you have any question regarding this tutorial or you want to add or suggest new edit please send me email via contact form. Thank you.