It requires source and destination folders to sync. It keeps watching on source directory and if it detects any changes on source it will copy them to destination directory.

If you want to learn how to sync local folders follow the link below:

How to sync local folders?

How to sync web servers?

If you are working on higher traffic websites you may be using load balancers. Let's imagine that you have following model where you have one load balancer and two web servers.

During deployment you have to physically log on to two web servers and deploy your code. Imagine when you horizontally scale your servers and add 5 more web servers.

Now, you have to deploy on 7 web servers the same code. It is annoying and to solve this issue we will take another approach.

We will have one deployment server which we use to deploy our code and from their code will be copied to other servers. Now, you have to deploy only two one server yupiee!!

How to sync two web servers?

Let's imagine that we have two web servers and we want to sync them I mean we want to make sure both of them uses the same code.

Let say we bought a new server and we use it only for deployment purpose and later our deployment server will be in sync with other two servers. 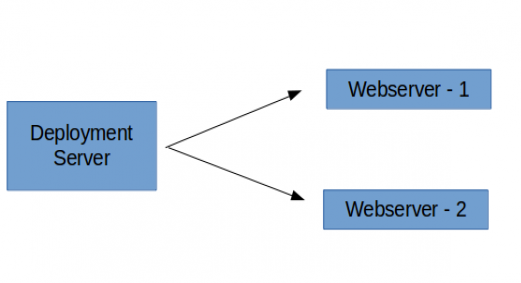 First of all we will login to our deployment server. Once we logged on we will generate ssh key and we will copy these generated ssh key to other web servers.

If you want to know how to install lsyncd daemon follow the link below:

Finally, we need to restart our lsyncd daemon and try to deploy our code:

We will first restart our layncd daemon and then using git we will deploy our code to our deployment server then lsyncd will detect these newly deployed changes and will copy them to our web servers.

Now, check the lsyncd logs to see if it is copying all changes to remote servers.

How to check running process for lsyncd?