If you're developing laravel project on a Mac and Docker Desktop is already installed, you can open your terminal and type following commands to create a new Laravel 8 project.

Once above command runs successfully you will see output like following image: 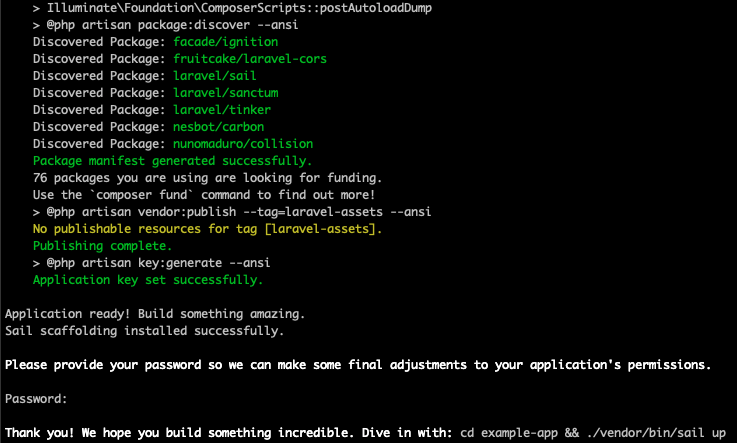 With your newly installed laravel 8 project and using docker you are now able to run your laravel 8 project inside docker environment. After the project has been created, you can navigate to the application directory and start Laravel Sail.

Laravel Sail provides a simple command-line interface for interacting with Laravel's default Docker configuration: Open your terminal window while being in laravel project root directory and run following command to run your app:

Once docker images are pulled and containers are running you will see something similar output on your console:

Go to your browser and hit: http://localhost to see your running app.

How to check running containers in Laravel 8?

Now, you know that your project is running under docker therefore you would need to learn some of the useful commands in order to interect with docker containers. First command you are going to learn that will help you show all your running container will be docker ps.

Open your terminal and type one of the following command to see all running containers:

Above command will show you following output:

How to check container logs in laravel 8?

To check the app container log you can run following command:

Followings are some of the important commands you can use: